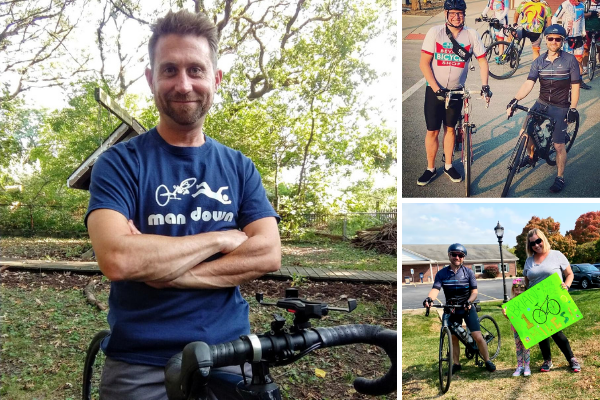 At Atlantic, we are proud of the individual accomplishments of every single one of our employees. These accomplishments range from personal to professional life goals to collective efforts within their communities. When Atlantic heard about employee Brian Fee raising over $3,000 for a charity in his community, we knew we had to share his story.

Brian Fee, Facilities Manager at Atlantic MDW (Chicago Midway), has always had a love/hate relationship with working out. After a slew of injuries and some encouragement from coworker Mike Wheeler, now General Manager at Las Vegas, Brian transitioned to using a bicycle to work out, and it quickly became a passion of his. The two, Brian and Mike, used to race in the Atlantic parking lot at the MDW location. It was love at first bike, and Brian decided then that someday he was going to complete the bicyclist's goal of a "century ride," one-hundred miles pedaled.

At the beginning of the year, Brian was planning on running in the Chicago Marathon for a local charity Mercy Home for Boys and Girls, but COVID quickly halted those plans. The money that would have been raised during the fundraising for the marathon was going to directly support Mercy Home and the children and families that they help. Mercy Home provides a safe and stable home for impoverished children. In addition to shelter, they provide food, clothing, and the tools children need to develop as contributing members of society.

Through a personal connection of his at Mercy Home, Brian decided he could still help this important charity while also accomplishing his goal of completing a century ride. And last month, Brian did just that.

He completed his century ride by bicycling through several trails in the south suburbs of Chicago. He also managed to singlehandedly raise over $3,000 for Mercy Home. He set out with a goal of only $500 and just never stopped, raising $2,500 over his original goal. He looks forward to hopefully doing this again next year, as an organized bike ride, with a large turnout contingent on COVID.

Brian's thoughtfulness and willingness to raise money for a local charity, all while dealing with the challenges the COVID pandemic has brought, is truly uplifting. We are proud of our employees that enjoy helping others and who go out of their way to make an impact in their communities. Congratulations, Brian on your century ride and incredible charitable donations.
BACK TO ALL Atlantic Cares