Pilot for a Day! 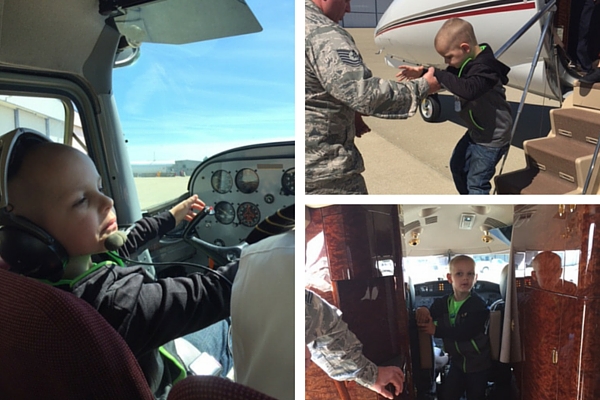 Camden is a 5 year old boy that is terminally ill with brain cancer in the Louisville, Kentucky area. His doctors have given him only 6 months to live, and during this time his mom, Christine, is doing everything she can to help him live his life to it's fullest.

One of Camden's bucket list requests was to become a pilot for a day! Tony, a UPS pilot, happens to own his own Cessna 172 and wanted to help. Christine is afraid to fly, and when Camden's grandmother couldn't make it for the flight, one of Atlantic's customer service representatives in Louisville, KY (SDF) gladly stepped up to the plate. She flew along with Camden to make sure he had an exciting trip. He was nervous at first, but with our CSRs kind encouragement and peaceful, calming presence, they flew up and away.

Camden had an amazing experience! While he was enjoying his flight, SDF's line manager, Mark Foley, was attentive to Camden's mom and making sure she was on the ramp to see her son take off and land. When her phone's battery died, Mark even taped the landing for her so she would be able to show Camden. When Camden landed, other pilots were starting to ask what was going on and after they found out, they wanted to help offer an amazing experience for him, too. Camden was able to check out a few other aircraft on the ramp by sitting in the cockpit as a pilot and in the back as a passenger.

Being able to meet Camden and his mom forced the Atlantic SDF team to look closer into their own lives and take notice to what really matters. The events that took place in SDF were truly magical. For updates on Camden and his fight against brain cancer, click here.
BACK TO ALL Atlantic Cares