Weathering the Storms - Together 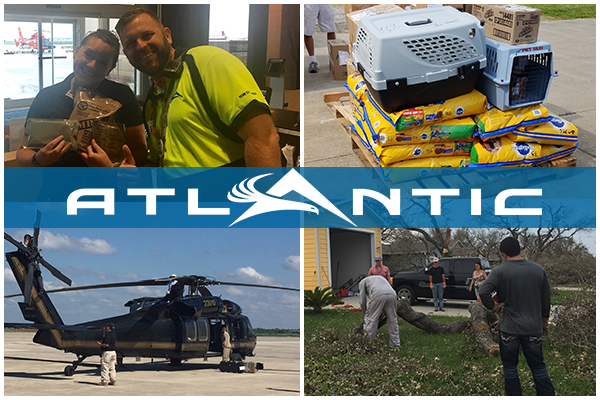 The 2017 hurricane season is rivaling the most active ever. Unforgettable hurricanes, such as Harvey, Irma, Jose, and Maria, will be remembered and compared for years and years to come. There have been a great number of Atlantic locations that have suffered directly from these storms, but what is most impactful is not seeing how our locations picked back up after the storm, but instead how our Atlantic family has come together to help others.


It all started with Hurricane Harvey making landfall along the Texas Gulf Coast as a Category 4 hammering directly into Rockport. Harvey stalled over Texas for days dumping torrential and unprecedented amounts of rainfall with peak accumulations of over 50 inches. Harvey is the wettest hurricane on record in the contiguous United States and resulted in catastrophic flooding primarily in Houston and surrounding areas. These floods displaced more than 30,000 people and prompted more than 17,000 rescues.


Houston Hobby (HOU) experienced flooding on the airfield causing the airport to shut down and area roads were completely impassable and submerged. Carmen from HOU jumped right into action with her husband and coworker Carla aiding in rescue efforts for her fellow Houstonians using their personal truck. Social media played a huge role in determining where residents were that needed help, and their successful efforts rescued around 70 people to safer ground. Josh, general manager at HOU, bought and delivered baby formula to his coworker who ran out and couldn’t leave his area due to flooding. After flood waters started receding, the HOU team quickly reported back to assist in clean-up efforts so they could assess damages and prepare to open back up. This included Trish who stayed at a hotel nearby the base to help keep an eye on the area and its changing conditions. So many team members and customers have donated clothing and necessities to help those in need in the area. The HOU team has continuously worked hard to disperse these donations carefully to those who are in need. 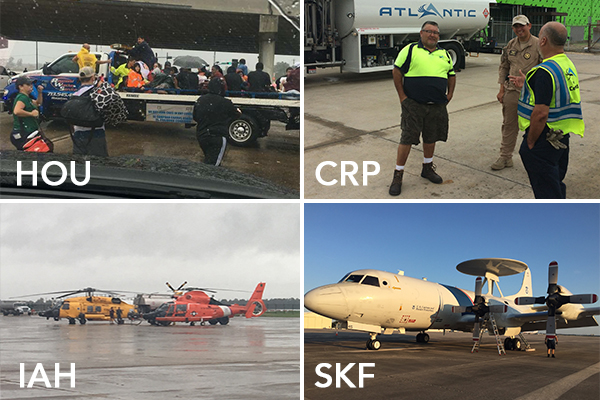 Atlantic locations in Corpus Christi (CRP), San Antonio (SKF), and Houston Intercontinental (IAH) continuously fueled aircraft in active rescue missions for days. Justin from CRP was assisting with evacuees that were being flown in and he found out they hadn’t eaten in two days and were very hungry. He ran to his truck where he had a loaf of bread and a jar of peanut butter and began making them all sandwiches. At our IAH location, although this airport was also closed, they were able to stay staffed to ensure the fueling of rescue aircraft. The first team members to respond were Andre and Gary staying overnight until management staff, Jeff, Mark, and Brandi were able to arrive and later Dennis. They remained overnight and safely at the base until Wednesday morning with the airport opening back up later that day. Other IAH staff that couldn’t make it in due to flooding helped in other ways, such as, picking up 200 meals and delivering to local fire departments and people in need, and assisting many with flood damages and cleanup efforts. Even though our Austin (AUS) location didn’t suffer harsh effects from the storm, they felt the need to assist by gathering donations and items in need. Brice, general manager at AUS, has been going to Rockport, where Harvey made landfall, each and every weekend to deliver items and assist with cleanup efforts in the hardest hit neighborhoods. AUS also helped load many aircraft that were stocked full of water and other essentials headed to Houston, Beaumont, and other affected cities. 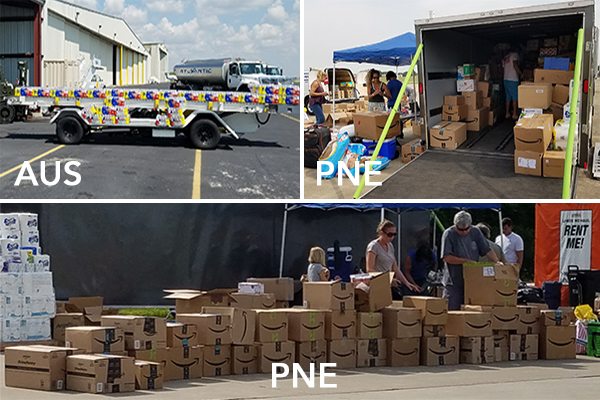 Just as the hit of Harvey was over, Category 5 Hurricane Irma slammed into the Caribbean islands, Cuba, Florida Keys, and up the western coast of Florida. The Caribbean islands took the hardest impact as Irma was at her strongest. Many islands were completely devastated with wind and flood damage, including the US Virgin Islands of St. Croix, St. John, and St. Thomas. Many St. John residents fled to safety in the Philadelphia area when Irma hit. Our Northeast Philadelphia (PNE) location teamed up with these residents and offered to assist by letting them utilize their facilities as a hub for their grassroots relief organization. The media quickly helped to spread the word and supplies and donations began piling in to help the islands. These necessities are being gathered, sorted, and prepared to ship by volunteers from the area. All goods are being flown down to the islands and further transported out to those in need.


It’s going to take months and even years for many areas to recover from this year’s hurricane season, and it’s not even over yet. Areas will have to be completely rebuilt, houses gutted out or torn down entirely, and basic necessities such as running water, electricity, and cellular service brought back in. It’s truly touching to see so many making people coming together to help each other in this time of absolute tragedy. As time goes on, Atlantic will no doubt continue to band together to help in the rebuild process for not only themselves and their family members, but anyone in need.