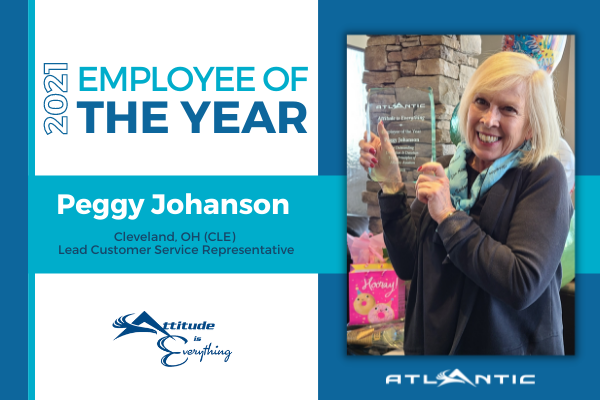 Our lead customer service representative in Cleveland, OH (CLE), Peggy Johanson, is so much more than just a valued worker. She is a selfless woman with a generous heart that has a calling to care for people, which is exactly how she became Atlantic’s 2021 Employee of the Year.

Peggy started her career in aviation over 30 years ago and has been with Atlantic for 22 years! From the beginning, she has always had a warm, caring heart. A local pilot shares, “I was a young guy when I started out as a new pilot, and she always made sure I had what I needed. She was always the mom figure and made sure everyone was taken care of.” It’s clear to us that things have never changed! When Brittany, an Atlantic employee, needed help, Peggy wasted no time going out of her way to take care of everything she needed.

Brittany shared with Peggy that she was going to have extensive knee surgery a few days before Christmas. Her recovery time was going to place her on medical leave for a least twelve weeks. Prior to the surgery, Peggy went to Michele Vamis, CLE Customer Service Manager, and mentioned she was thinking of a way to help Brittany throughout her recovery since she has an active 5-year-old son. He was not very thrilled that his mom would not be able to do things with him as she normally would, and Brittany was worried about being able to be mobile enough to cook and care for him. That’s when Peggy decided she was going to step in and be Brittany’s meals on wheels. Every week, Peggy would cook meals for Brittany and her family and would take them over to her home on Saturday mornings – for 12 whole weeks!

Peggy never missed a weekend, even when her own son was having serious complications from an illness, she made sure Brittany had fresh meals. She wouldn’t just drop them off and leave, she would spend hours there, taking care of things and spending time with the two of them. She not only cared for Brittany physically but emotionally, too. Michele had the pleasure of delivering some home-cooked meals with Peggy on a few occasions and shared, “Brittany’s smile could light up a room. She was overwhelmed by Peggy’s generosity.” This is one of many things Peggy enjoys doing for people who may need an extra hand every now and again. She will always say cooking is her love language, and it sure does show.

The Atlantic CLE team and other special guests presented Peggy the Employee of the Year award with a big surprise party. They sent her on a wild goose chase to keep her out of the base while they filled it with festive balloons, food, family, and friends. At least 40 people came to celebrate Peggy, including her 90-year-old mother, sisters, son, customers who have known her for years, and Atlantic employees, including Jay Hamby, Sr. VP of Operations, who presented the award. Brittany shared, “What Peggy did for me was amazing. I truly cannot find the right words. It meant the world to me and my son. My recovery took longer than expected, so those meals she brought every Saturday were so helpful and thoughtful. Peggy is truly an amazing friend and puts others in front of herself.”

We are truly grateful and inspired by employees like Peggy for going above and beyond, always putting others before themselves. Peggy’s selfless heart and caring attitude not only made an impact on Brittany, but everyone here at Atlantic. On behalf of everyone at Atlantic, congratulations on receiving this special award!