Sawyer King - Employee of the Year! 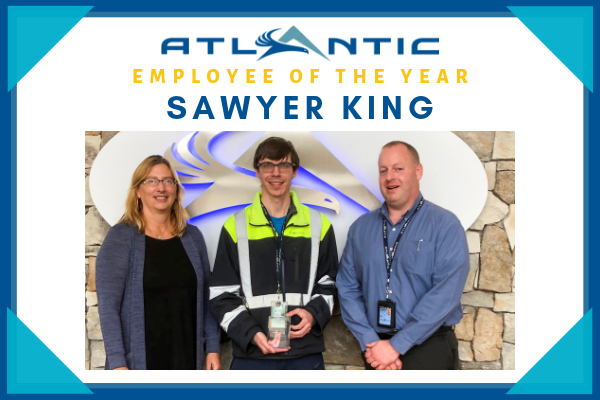 There is one word that sums up the actions of our Atlantic Employee of the Year, and that word is DEDICATION. Sawyer King, line service technician of 2 years from Atlantic Elmira (ELM) didn’t let the harsh winter weather get in his way. Instead, he did whatever it took to report to work for his scheduled shift.

A winter storm was rolling through Elmira and brought with it freezing rain and snow. The night before Sawyer’s 0500 shift, an inch of freezing rain fell and then transitioned to snow, which left an additional 5-9 inches across the area as the temperature bottomed out at 12 degrees Fahrenheit. Sawyer woke up to get ready for work and quickly realized that his car was not going to make it out of his driveway, so he decided that he would walk to work. With his house roughly seven miles away, he began his nearly 3-hour trek through a snowstorm so that he could be there to fuel and de-ice ELM’s commercial customers.

The ELM team, including regional manager Shawn Rose and regional sales manager Rachael Jones, along with Sawyer’s family surprised him with the big news that he was awarded Atlantic’s 2018 Employee of the Year. His general manager Theresa Doane invited tenants and airport personnel to a catered lunch in celebration.

In 2018, there were 57 truly touching stories of Atlantic employees reaching beyond the normal scope of their responsibilities for their customers and fellow employees. Sawyer’s efforts stood out above the rest. He not only exemplifies the Atlantic Attitude in his daily actions, but his dedication to serving his customers goes far above and beyond.
BACK TO ALL News