Atlantic Focuses on Giving In Many Ways 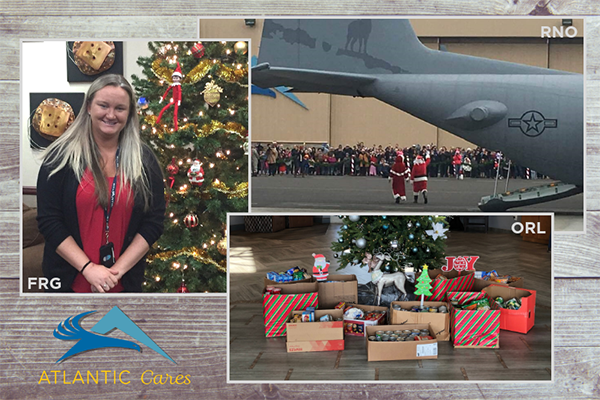 Every year Atlantic chooses a variety of different ways to give during the holiday season. After all, it’s who we are. We want to be impactful, we like to not only build and grow relationships with our communities, but help to make our communities stronger, and we love to champion a cause for positive change.

Samantha at our Farmingdale, NY (FRG) location collects and sends holiday greeting cards to our troops overseas by partnering with the Heartillery Group, a non-profit organization whose mission is to show support, love, and gratitude to our troops overseas. Samantha has been doing this for years, and we were so inspired by her passion that we spread this initiative Atlantic-wide. Through combined efforts from 39 of our locations, including our corporate headquarters, Samantha sent just under 1,400 cards this year! It’s so touching to see the outpour of support our employees have shown for our troops stationed overseas during the holiday season.

Atlantic in Reno, NV (RNO) partners with the Reno-Tahoe International Airport every year to help plan and host Operation Santa Claus. This annual event gives families of The Children’s Cabinet, a local non-profit that helps children and families in time of need, an unforgettable experience. Many local organizations work together to supply families a fully decorated tree and many presents from their wish list. Atlantic RNO hosted more than 400 people in their hangar and on their ramp this year. This included the donor families, 3 local TV station crews, the Mayor of Reno, Airport Board members, area pilots who were involved in a parade of 20 planes bringing in the presents, University of Nevada football players and cheerleaders, a choir, gymnasts dressed as elves, and of course, Santa and Mrs. Claus arriving in a Nevada National Guard C-130. See a video here.

Reno-Tahoe International Airport’s VP of Marketing, Brian Kulpin, expressed special accolades for the Atlantic RNO team, “I want to extend our heartfelt thanks to the tremendous team you have at Atlantic-RNO who helped us plan and coordinate the amazingly successful Operation Santa Claus event. Atlantic’s efforts brought gifts and joy to more than 160 needy people who otherwise would not have had a Christmas. You helped show our community the true heart of aviation.”

Many other Atlantic locations were also involved in their communities this holiday season. Atlantic at Orlando Executive (ORL) asked employees and tenants to bring in canned food items in lieu of an admission ticket for their holiday party. Their efforts resulted in 450 lbs of food donated to the Second Harvest Food Bank of Orlando, surpassing last year’s donation of 300 lbs!

Atlantic in Cleveland, OH (CLE) collected cold weather items for area homeless and donated them to the Northeast Coalition for Homeless. Items that were donated included winter hats, coats, gloves, scarves, boots, sweatshirts, and other clothing items. The CLE team had the opportunity to meet the director of NE Coalition for Homeless, and they are eager to continue to work with them throughout the year.

Atlantic in Oxford, CT (OXC) participated in a project with Civil Air Patrol to collect various items for military personnel that are deployed. They were able to fill a box with tangible items as well as a monetary donation. Many other Atlantic locations, including Stockton, CA (SCK) also collected items for toy and food drives. It’s truly inspiring to see the different ways that our locations choose to give back to their communities.
BACK TO ALL Atlantic Cares