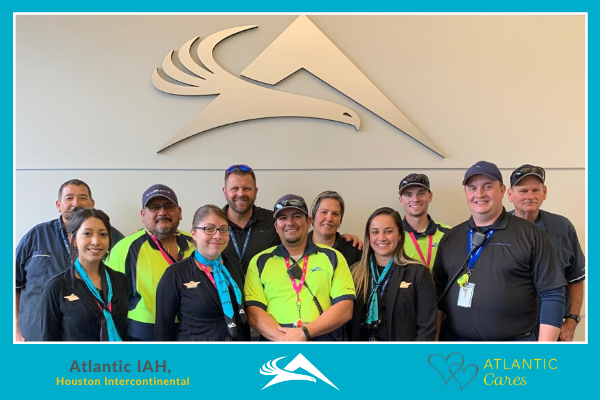 For many in the Houston area, Tropical Storm Imelda brought back frightening memories of when Hurricane Harvey battered the Texas Gulf Coast just two years ago. Imelda was alarmingly similar. Faced with heavy rain and dangerous flooding, the Atlantic IAH team jumped into action to help those who got caught in the rapidly rising water. They opened their doors to anyone who needed it and provided warm clothes, food and shelter from the rain.

The team at Atlantic IAH did all they could to assist many people during the storm. For example:

One young couple had lost their vehicle and everything they had inside. The only thing that made it was some important documents, their cat and dog, and most importantly their lives. When they first arrived, the IAH team gave them access to phones so they could get in contact with their family. They made sure they had dry clothes and food for them and their pets.

A shuttle bus was on the way to the commercial terminal when it hit high water and needed rescuing. The bus flooded completely, and a high-water rescue vehicle brought the passengers and driver of the bus to the nearest location on dry land – Atlantic IAH. Everyone on the bus was soaked to the bone. The IAH team gathered old employee uniforms so they could change into dry clothes.

With the storm intensifying, it didn’t look like anyone was leaving anytime soon. One of Atlantic’s Line Service Technicians grabbed his lunch that he had brought for the week to share, sandwich fixings. A Customer Service Representative went ahead and used the fixings to make finger sandwiches for everyone stranded in the lobby to snack on as the weather passed. The team dug into their hurricane supplies, which included, canned soup, granola bars, chips and other snacks. They offered bottled water, as well as coffee, tea and hot chocolate to warm their guests up. Everyone was extremely grateful for what the IAH team did for them in their time of need.

Towards the end of the day, eight hours later, folks were finally able to make it home or to their flights. But one woman was still in the lobby. General Manager Jeff Dornak took notice. She was the bus driver of the shuttle bus that had flooded. The towing company had already picked up her bus, but her employer failed to provide accommodation for her. Dornak and the team took the time to get to know her and kept her company as she waited into the evening for someone to pick her up. She said, “What a day, I could sure use a drink.” Dornak responded with a top shelf bottle of whiskey for her to enjoy when she finally made it home.

Flooding in the Houston area can be deadly and without hesitation Atlantic IAH opened their doors to their community and those in need. Atlantic Aviation is proud of the generous and compassionate employees and their actions that make up the Atlantic Houston IAH team.
BACK TO ALL Atlantic Cares