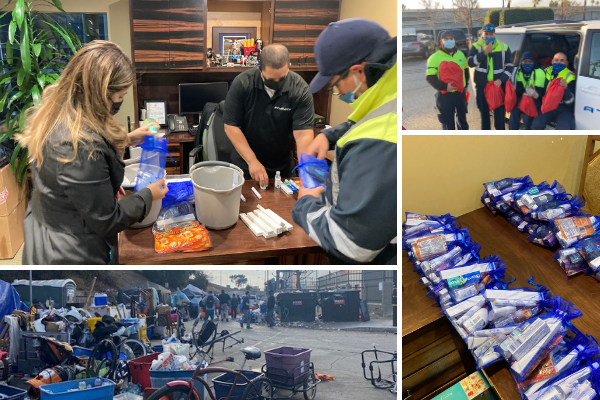 California has the third largest homeless population in the nation.  Atlantic Aviation Los Angeles (LAX), sees firsthand how homelessness has affected their city as a large homeless population resides near the airport. With the challenges of the pandemic, homelessness in Los Angeles has worsened and over 41,000 people are living in shelters, in their vehicles or on the streets.

General Manager, Victor Walker and his team decided they needed to do something about it. The team gathered a crew, “I reached out to personal friends and my staff, to help provide some much-needed help to our local homeless community,” says Victor. The team, including Atlantic employees and volunteers, pooled their own hard-earned money and volunteered their time to put together care packages to give to the homeless community that surround the LAX airport.

With the help of the LAX Airport Police, several vendors and personal friends, the Atlantic LAX team distributed care packages to around 400 homeless people during the month of December.

From the planning to the execution, Atlantic Aviation could not be more proud of the Atlantic LAX team and their efforts to give back to those in need in their community, especially during a pandemic.