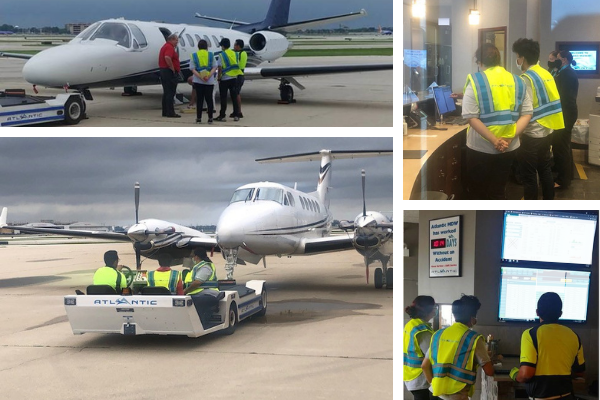 Committed to making a positive impact on their community, the team at Atlantic MDW was grateful to participate in One Summer Chicago. Chicago Department of Aviation chose Atlantic Aviation, among other airport companies, as a partner host for this incredible opportunity to bring aviation into the hands of Chicago’s youth. This program provides local youth with employment and learning opportunities during the summer. One Summer Chicago encourages students to gain experience in fields of their liking by placing them in areas and departments aligned with their area of study. This was the first year Midway Airport was involved in the Careers in Aviation internship through One Summer Chicago. During the program, Atlantic developed a tailored curriculum and experience for the students that taught them about general aviation and FBO operations.

Atlantic MDW was visited by One Summer Chicago’s committee, which included the local council and city officials, to learn more about our company and operations. The MDW team showed them what we do, how we do it, and why we do it. They even taught them about our unique culture, the Atlantic Attitude. Further, it was explained that Atlantic is proud to be a grow from within company, and many employees start as entry-level employees and grow their career with Atlantic. That left a lasting impression on the committee.

Atlantic MDW was excited to host four students in the 6-week summer program. One day a week for four hours, the MDW team worked directly with the students to enrich them with both classroom style detailed learning and hands-on job shadowing. This combined and custom curriculum experience taught both customer service and ramp operations of an Atlantic FBO. A big thank you to Edgar, Craig, Tiffany, Susan, and Bernard, who spent most of the time with the students.

At the end of the program, the students shared their experiences and all they had learned. Atlantic was an aviation company that really stood out to all of them. The Atlantic MDW team was really honored for the opportunity to host these students. It’s important to the team that they are consistently giving back to their community, and to be able to give in a way that included their passion for aviation made it even more memorable.