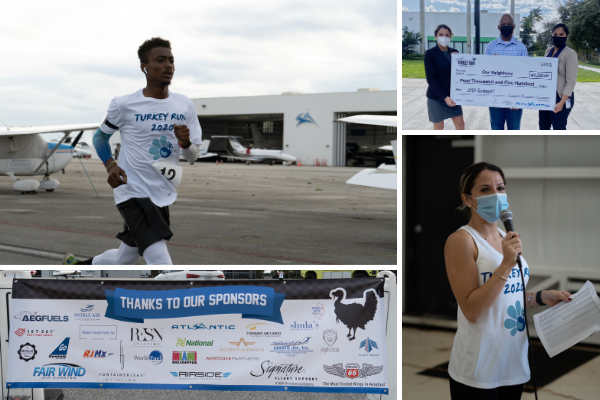 Atlantic Aviation Opa-Locka (OPF) goes above and beyond each year when they coordinate their annual Turkey Run. The Turkey Run is a charity run that takes place at the Miami-Opa Locka Executive Airport, in which the money that is raised is used to buy turkeys for families in need in the Miami-Dade Community. This year, the 6th annual Turkey Run, led by Atlantic’s Customer Relations Manager, Nina Perez, helped feed hundreds of families and raised thousands of dollars for Miami-Dade County.

Nina begins planning the annual Turkey Run months in advance. She starts by putting together informational packets encouraging the airport community businesses to spread the word and ask their employees to participate. Sponsorships begin at only $75, which helps to encourage everyone to be involved and come together for this incredible community cause. All three FBOs on the field, including Atlantic, come together and equally sponsor a much larger amount. All proceeds go straight to the Miami-Dade County Commissioner who then reallocates the funds for families in need and distributes out the turkeys. Prior to COVID, sponsors and participants were invited to attend the turkey distribution event where the turkeys are given to the families that need them most.

In addition to raising money for the families in need, Nina makes sure the participants in the race are having fun and staying competitive. Prizes for the run are donated and include things like a complimentary helicopter ride, a luxury hotel weekend stay - all costs paid for, and more. Everyone enjoys coming together to help their community, and working together for a common goal when fantastic prizes are on the line!

This year, the run was a huge success with the airport community coming together and raising over $13,000 for Miami-Dade County. Nina had this to say, “I cannot thank you enough that this year, of all years, we were able to come as one OPF Airport Family and demonstrate the act of thoughtfulness and community during these unprecedented times. In a holiday that brings everyone together, and in these strange times where it is not suggested, it is nice knowing that we were able to donate something to these homes.”

Nina and the Atlantic OPF team are incredibly honored and grateful to have been able to put on the annual Turkey Run this year. The airport community is already looking forward to next year's run, however, it will look a bit different going forward.

They will be missing someone special, as this year was Commissioner Barbara Jordan’s last year in office. Commissioner Jordan has put years of dedication, commitment, and investment into the Miami-Opa Locka Executive Airport and Atlantic Aviation is forever grateful. She personally saw to the success of many in the OPF airport community, and those in the Miami-Dade area. Atlantic Aviation is honored to have partnered with her for so many years. That being said, the OPF team is equally excited to continue to form a partnership with her successor, Commissioner and former Mayor of Miami Gardens, Oliver Gilbert.