Atlantic PBI Jumps to the Rescue 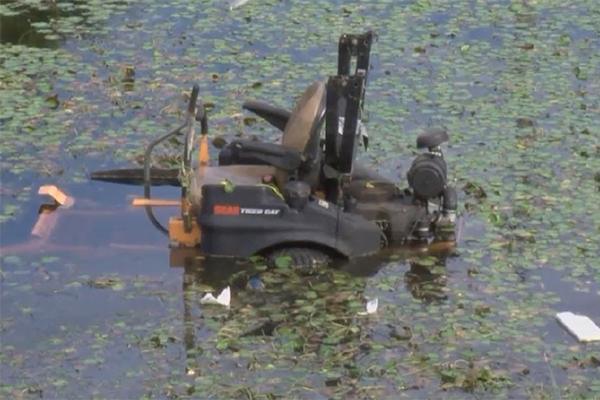 The shoreline of the pond gradually slopes down to the waterline. The particular area where this incident occurred has a rather steep shoreline in many places. One of the landscapers was mowing the grass around a particular pond, and while turning the mower he made a miscalculation of the steep grade causing him to pick up speed toward the waterline. As he got closer to the water he made a sudden turn causing the mower to flip. The mower came to rest in approximately two feet of water in an upside down position. The victim was now trapped underwater by the weight of the mower. One of his co-workers witnessed the event and unsuccessfully attempted to free him.

At that point Atlantic employee Ken Brown was walking by and was flagged down by the co-worker. Ken immediately radioed for help and within seconds several Atlantic employees were on scene. Joe Therrien, Sergio Rivera, and Nicolas Camacho immediately jumped into the pond and instantly flipped the mower over, freed the victim from his seatbelt, and pulled him to shore. Upon reaching the shoreline the victim was not exhibiting any vital signs. Atlantic employee Allyson Brogan immediately began to administer CPR and continued to do so for approximately two minutes before the victim was revived. The victim understood very little English, but Nicolas was able to translate to him and assured him he was ok.

By this time emergency crews that Atlantic employee Karen Lewars had contacted began to arrive. They began to administer additional care and eventually transported the victim to the hospital for further evaluation. The owner of the landscaping company reported that the victim is with family in the hospital and is expected to make a full recovery. Without any question the instant actions of our employees saved this man’s life, and all involved played an important role in his rescue.