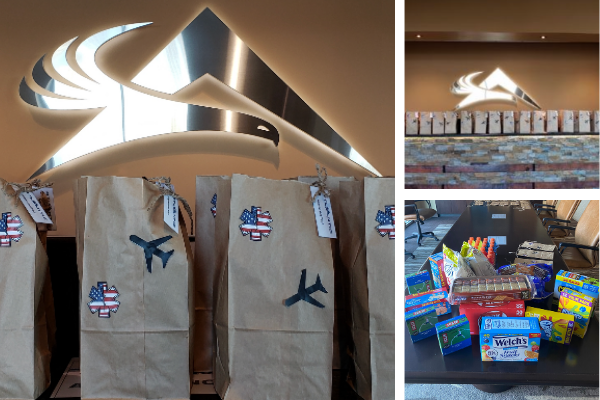 When Atlantic Reno General Manager, Mike, was called late one night he didn’t know what to expect. On the other end of the phone was one of his lead line service technicians with an idea to help crew members of air medical flights. Lead LST Kordell Sesock came up with the idea for the RNO team to come together and to donate snacks and drinks to the air medical flight crews that are risking their own health to continue transporting patients in need of critical care.

Kordell and Customer Service Representative Kailey Salter worked together and made a sign-up list on the bulletin board in the break room asking other employees to donate. Everyone was so excited to find out about this initiative and to be a part of the effort. The RNO team rallied together and donated more food than they could have anticipated. They were able to stuff oversized lunch bags full from all the incredible donations from the staff. Inside the bags are an Atlantic water bottle, some Gatorade, and an assortment of prepackaged snacks, like chips, crackers and candy.

It’s been such a hit with air medical flight crews that Reno is now planning on creating these snack bags for Airport Fire and Police as well. GM, Mike is so proud of his team for coming together and doing whatever they could, not only to make a difference, but also make someone’s day. Atlantic Aviation commends the Reno team for their commitment to going above and beyond during this time of need.
BACK TO ALL Atlantic Cares