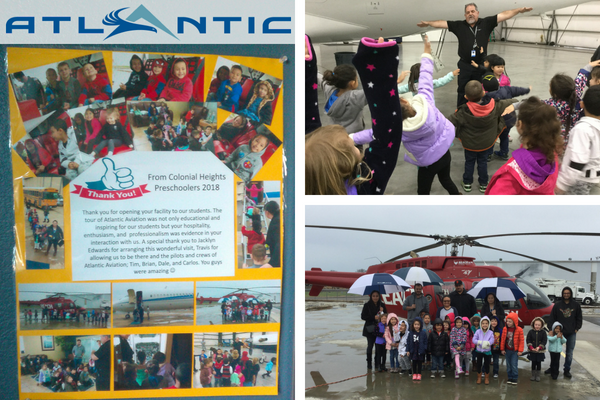 Atlantic Stockton (SCK) had the pleasure of hosting customer service manager, Jaclyn’s, son’s preschool class for a tour of their base and learn about some aircraft. A couple of SCK tenants were kind enough to open up their aircraft for the kids. The class had the opportunity to climb aboard a private MD-80, a Challenger, as well as a medical helicopter for a cool photo opportunity.


Carlos, Atlantic regional safety manager, happened to be at SCK that day, and instead of going about his day and finishing his normal visit duties, he gladly jumped into action to educate the class on the many types of aircraft and explain how they are able to fly. He followed it up with a hilarious Q&A session.


The kids were very excited to learn about the planes, and even more so they learned if they work hard and go to school they, too, could become a pilot someday. The class even made a poster board sized thank you with lots of pictures that really showed the enthusiasm and gratefulness of the entire class. SCK could not be happier that they had the opportunity to host and educate a new generation about our exciting industry of aviation.