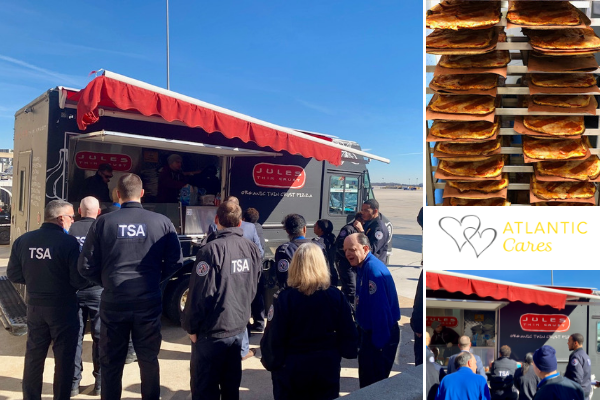 Atlantic Philadelphia (PHL) joined forces with the Philadelphia International Airport and a popular local pizza company to provide free lunches to the airport’s federal workers who missed two paychecks due to the government shutdown. When Atlantic was approached by Jon Ordway, local business owner of Jules Thin Crust Pizza, with the idea of providing pizza lunches to all federal employees at PHL impacted by the shutdown, Atlantic’s Regional Manager, John Butterworth, jumped into action.


Working closely with the airport, Butterworth and Ordway coordinated the logistics of providing free, to order, pizza lunches to over 200 employees at various locations around the airport. They worked together to authorize field access close to the TSA offices and the air traffic control tower facility. Within a week’s time, they communicated their intent to the TSA employees, Air Traffic Controllers, Airport Security, Operations and Media Relations. The teamwork and collaboration from all parties led to an outstanding day.


With a food truck, Ordway and Atlantic PHL traveled to various locations around the airport to distribute the great tasting pizza. The pre-made pies were heated with a conveyor type oven in the truck and served to order. They spent the day serving approximately 250 employees with cookies, drinks and over 150 pizzas. The leftover pizzas were distributed to employees and airport law enforcement.


The day was met with an overwhelming outpouring of appreciation for both Ordway’s generosity and care, and Atlantic PHL’s orchestration to make this happen. It was a very rewarding day for all and Atlantic Philadelphia’s small contribution towards a very difficult situation.


Atlantic locations around the country have come together to support our federal aviation workers during the shutdown. From lunch for Tower personnel to barbecues for Customs Agents, Atlantic has fed over 800 federal employees around the country.
BACK TO ALL Atlantic Cares