Atlantic Supports Their Communities For The Holidays 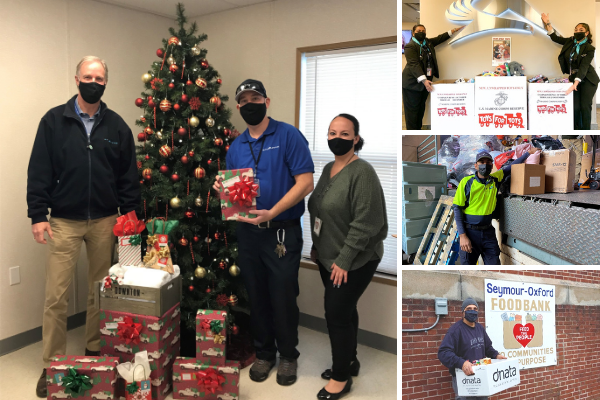 While ten Atlantic locations participated in the new Adopt A Family Program for the holiday season, many other Atlantic Aviation locations went above and beyond to support their communities this holiday season, as well. In the last couple of months of 2020, Atlantic locations collectively donated hundreds of thousands of items for families in need, like presents, clothing, food and general necessities for local programs, such as food banks and shelters. A few went even further and got to know individual families in their area and supported them for Christmas. Below are just a handful of incredible acts of kindness and philanthropy that individual Atlantic locations have provided for their community.

Many Atlantic locations, including Stewart, NY (SWF), Addison, TX (ADS), and Boca Raton, FL (BCT), participated in the nationwide program run by the Unites States Marine Corps Reserves, Toys for Tots. A program dedicated to providing and distributing toys to kids whose parents cannot afford to buy them gifts for Christmas.

Atlantic Albuquerque, NM (ABQ), Santa Barbara, CA (SBA), and Casper, WY (CPR), adopted families through the Salvation Army Angel Tree Program that helps provide Christmas gifts for kids around the country each year. CPR was gracious to adopt a family of seven, and SBA delivered presents to ten deserving children in their community.

Atlantic Newport News, VA (PHF) donated grocery store gift cards through a local church for an elementary school in their area, making the parent the hero of the holiday. Our Sun Valley, ID (SUN) location worked with the Heartillery Group and sent 47 cards to US troops currently serving abroad, and hand-delivered 32 cards to their local senior assisted living facility. Every single employee signed a card and wrote a heartfelt message on the inside.

Atlantic locations across the country held donation drives for their communities, such as Atlantic Austin, TX (AUS) partnering with the Austin Boys & Girls Club for a toy drive. Opa Locka, FL (OPF) worked with their Commissioner to also hold a toy drive. Our Las Vegas, NV (LAS) location partnered with the Las Vegas Rescue Mission to collect goods. Atlantic Santa Monica, CA (SMO) donated food, clothing and personal care items to the Los Angeles Mission of the Cross of Hope for those that need it. Charleston, SC (CHS) donated clothing to My Sister’s House, a shelter for battered or domestically abused women. St. Augustine, FL (SGJ) donated to a no kill animal shelter and adopted a family with four kids to support for Christmas, and Oxford, CT (OXC) donated to the Seymour-Oxford Food Bank and a toy collection in support of the CT Police.

Finally, we have two locations that went above and beyond and adopted a couple of families for Christmas. The Atlantic Chicago, IL (PWK) team shopped and wrapped gifts for two single mothers, both with children under the age of ten. The team provided them with toys, clothes, home necessities and grocery gift cards for holiday meals. The Atlantic Philadelphia, PA (PHL) team also adopted two families, who are victims of gun violence. One family includes a 12-year-old boy who suffered a gunshot wound a year ago and is still recovering. He has two siblings and they are being raised by their aunt in temporary housing. The second family lost their 6-year-old boy to an errant bullet and have four other children to continue to support. Both these families had very little prospect of a happy Christmas. With this in mind, the PHL team gathered decorations, presents, clothing, and a warm meal to help bring them some holiday cheer.

Atlantic is so honored and proud of the many ways our employees come together to help those in need, especially around the holidays. It’s a time of year that should bring joy and happiness, and hopefully the delivery of needed support and comfort gave a little bit of joy and happiness these families would otherwise not have.