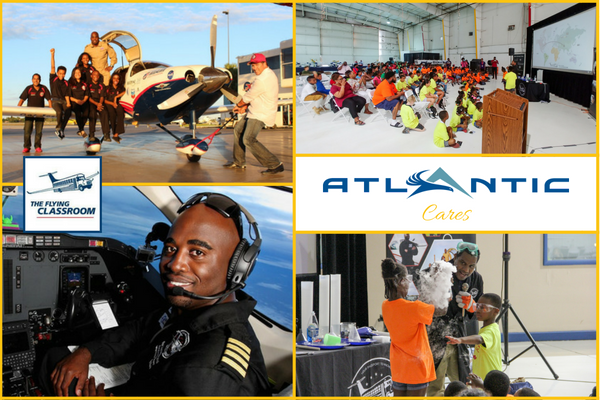 Eager to give back to the community Atlantic Birmingham, BHM, hosted a life changing event for over 150 area kids. Atlantic BHM brought together the airport community, the Southern Museum of Flight, and the local community by hosting the incredible pilot and educator, Captain Barrington Irving and The Flying Classroom. His nonprofit Experience Aviation was created to inspire students to pursue career opportunities in aviation and Science, Technology, Engineering, and Math (STEM) related fields. Captain Irving is revolutionizing online learning with The Flying Classroom program – a K-8 STEM supplemental learning program based on his global adventures and expeditions.


Atlantic prides itself on investing in the next generation of aviation professionals and recognizing the need for more young minds to get involved in STEM careers and the aviation industry. With a turnout of around 400 people, participants were immersed in the STEM workshops. The students were mesmerized by the most popular feature, a 3D printer workshop that “literally” made a prosthetic hand with working fingers! Cirrus Aircraft provided an aircraft on display to tour which was a hit with everyone.


The students were treated to a catered lunch as they watched a video highlighting Captain Irving’s background – although born in Jamaica, he grew up in a very poor neighborhood in Miami and played football for the #1 ranked high school in the nation. He was an NFL prospect who was offered a scholarship to the University of Miami. Inspired by his Jamaican airline pilot mentor, Captain Irving turned down this opportunity to pursue a career in aviation.


At 23, two years after founding his nonprofit, Captain Irving became the first, and only to date, African American to circumnavigate the globe solo in a single engine aircraft. He shattered the world record as the youngest person to accomplish this feat. The previous record holder was 37.


Captain Irving’s amazing story and his engaging and interactive presentations connected with the kids providing them with a role model and an inspiration. Atlantic is happy to partner with Captain Irving for many future events. Atlantic BHM donated everything to this event from hangar space, to incredible support personnel, to equipment and delicious food. Atlantic proudly donates fuel to Captain Irving and his incredible program.


For more info on The Flying Classroom click here!