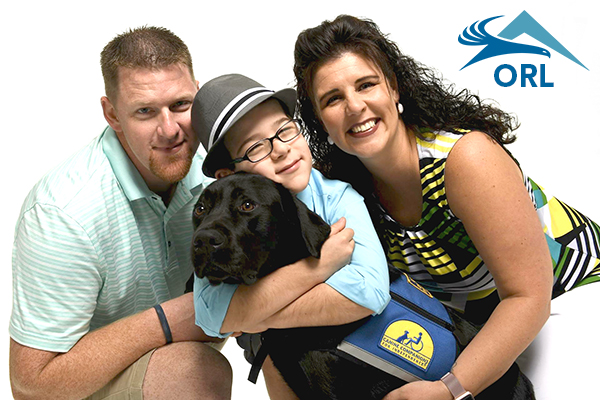 Christi, customer service manager at our Orlando (ORL) location, has found great appreciation for Canine Companions for Independence (CCI). Her son, Landon, was born with Cerebral Palsy and as a result has mobility issues. He has left side weakness which limits his ability to use his left side to pick up heavy items or walk for long distances as he also walks with a limp.


Christi and her husband Jack just happened to stumble upon the non-profit, CCI, which was founded in 1975. CCI specializes in enhancing the lives of people with disabilities by giving them highly trained service dogs and providing ongoing support - free of charge. Christi and her family first had to apply and qualify for CCI's services. After completing the lengthy application process, they were carefully matched with their very own canine companion, Artemus, and were able to bring him home after successful completion of a 2-week extensive training course. The impact that Artemus has had on all of their lives has been monumental. When Landon walks Artemus, he uses his left hand to hold his leash which forces him to use his left side more than before. He is also gaining range of motion in his left arm and muscle tone in his left leg. 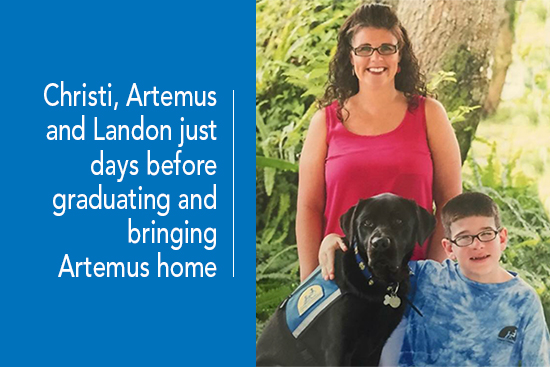 Christi is excited to see the positive changes that Artemus has brought and remarks, "Having Artemus in our lives has allowed Landon to gain back some of his independence. With Artemus by Landon's side, he is now able to walk one mile a night! At the theme parks in Orlando, Landon can successfully walk the entire way without the need for a stroller."


Since graduating from CCI in August of 2017 and bringing Artemus into their home, Christi and Landon have been campaigning on the life changing support that CCI brings to those with disabilities. They are so thankful for their experience that they have chosen to pay it forward by volunteering, speaking, and fund raising on CCI's behalf. They've spoken at several events including: CCI's fundraising event DogFest 2017 (watch a video HERE), the University of Central Florida (UCF)'s Service-Dog Training Education Program (STEP), and in April 2018 they will be speaking at a charity event in Apopka, FL that includes potential donors and current puppy raisers for CCI. They were also involved in a Walt Disney World sponsored photo shoot for CCI in which their story was featured in an article and was sent to the CCI community which includes donors for their program. But, most excitedly, Landon was chosen to be one of the faces of a new Build-A-Bear program that will feature service dogs wearing vests. The proceeds from these heartwarming stuffed animals will directly benefit CCI.


Christi concludes, "Canine Companions for Independence has changed our lives! We will continue to be advocates for this amazing organization and educate on the benefits of service animals."
BACK TO ALL Atlantic Cares