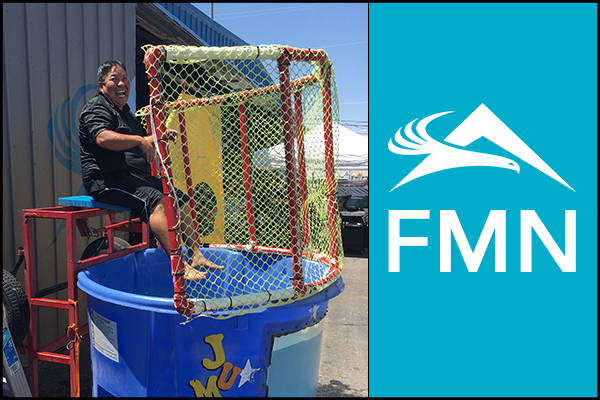 The end of the summer is always the best time of the year for Atlantic Farmington’s (FMN) annual BBQ which they celebrate with airport personnel, airport fire department, tenants, and customers. This year they wanted to do something a little more, so they decided to use a dunk tank to draw interest in raising donations for the Four Corners Foundation.

The annual BBQ event is something that everyone looks forward to each year. In true Atlantic style, they cook up a bunch of yummy BBQ with all the fixings and use it as an opportunity to thank customers, tenants, and show appreciation to the airport. The dunk tank was a hit and many staff members ranging from the GM, Line Service, and CSR’s happily took turns being dunked in a tank of water at 5 throws per donation.

Everyone had a great time and for a great cause! The Four Corners Foundation was established in 2010 with a sole focus on the homeless in San Juan County, NM. Since the original needs have been met within the first 5 years of establishment, their focus has branched out into multiple service areas by collaborating with other local not-for-profit organizations to magnify the positive impact in their community.
BACK TO ALL Atlantic Cares