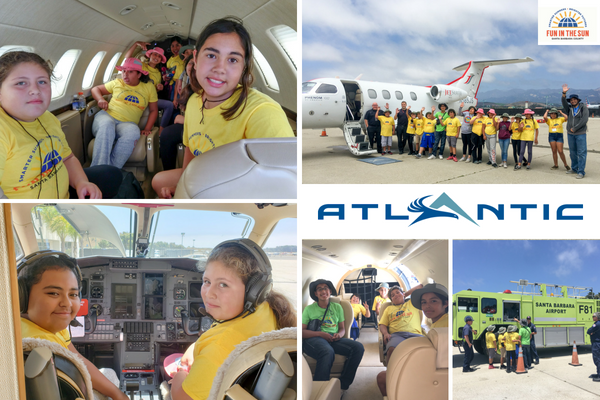 SBA prides itself on giving back to the community and works very closely with United Way Santa Barbara. They assist any way they can, whether it’s hosting events or donating their resources and time. When the Fun in the Sun director reached out to the community Atlantic SBA knew they had to host the field trip.

SBA had the pleasure of welcoming twelve future 6th graders, many of whom had never seen an airplane, for a tour of the base to show them the ins and outs of aviation operations. The tenants and customers thoroughly enjoyed talking with the kids and letting them tour their aircrafts'. The kids were even invited to sit in the cockpit! A couple of pilots that flew in went out of their way to talk to the kids and educate them on aviation. The girls were in awe of the female pilots who let them know that if they put their mind to it they could do it too. Tenant Turner, who went above and beyond for the field trip, said he just wants people to get as excited about aviation as he is.

One of their favorite parts of the field trip was touring Turner’s Pilatus PC-12. Turner was gracious enough to open all the doors of his aircraft, even the back luggage doors. This was especially fascinating! While it wasn’t the biggest plane they’d seen all day it was the most fun!

During their field trip, the Santa Barbara Airport Fire Department stopped by to chat with the kids and let them explore inside their trucks! SBA took the kids to the other side of the airport to see the commercial airlines in action. There they saw how planes were fueled and got to watch the fuelings in progress.