We Are Vegas Strong 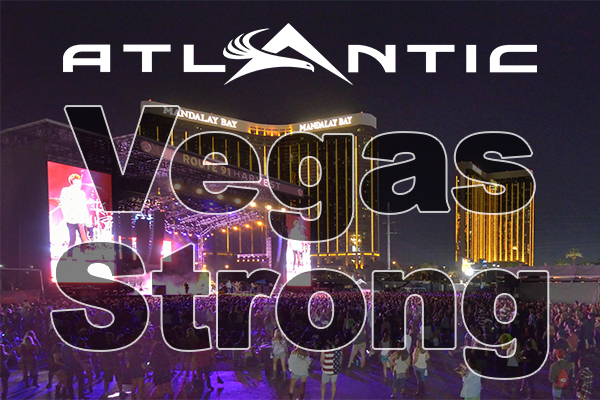 The city of Las Vegas suffered a heinous attack on October 1, 2017 during the Route 91 Harvest country music festival. An armed individual opened fire on the innocent people attending the festival from a room on the 32nd floor of the Mandalay Bay Hotel & Casino. Bullets rained down and everyone was in shear panic and fear as they ran for their lives to find an area where they could feel safe… and for many that safe place was Atlantic Aviation.


Atlantic Las Vegas (LAS) is located right off of the Las Vegas Strip and was very close to Route 91 Harvest festival. LAS employees Noel, Justin, Ramon, Juan, Itzel, and Joshua were on shift that night and reacted tremendously in catering to the various needs of the hundreds of terror-stricken people. They were able to contact the proper personnel to assist the frightened and even some of the injured victims. They distributed first aid supplies and passed out water and snacks. They were able to react to and care for those fleeing this tragic shooting while still remaining calm, as they showed genuine care and kindness to all in their lobby. At the time, nobody knew if there were more shooters on the ground or in other surrounding hotels or buildings. It didn’t matter to those LAS employees who acted in a totally selfless manner.


Also on the LAS airfield is an Atlantic Aviation company, Flightcraft, which provides maintenance services. Flightcraft employees Justin and Brian also went out of their way to help and assist anyone in need. As the hundreds of festival goers were fleeing the Las Vegas Strip in search of safety, Justin and Brian opened their office to let as many in as possible. They turned on all office computers and equipment so everyone could get online to contact family and friends to let them know they were ok. Many of the airport perimeter fences were compromised and broken down in several places and people were flooding onto the secure side of the ramp. Justin and Brian also drove around to pick up people that were confused and wondering around the airfield to bring them to Atlantic’s lobby.


In the days following the shooting, many that were seeking shelter that night took the time to write in to Atlantic LAS to express their gratitude for being able to take cover and be cared for in a safe structure with amazingly calm and caring people. You can read some of those stories HERE.


Our hearts truly go out the families and friends of those who lost loved ones, as well as anyone injured in this horrendous attack. We are very proud and grateful for our employees and their acts of immense courage and phenomenal display of human compassion in such a catastrophic and heart-wrenching situation.
BACK TO ALL Atlantic Cares