Atlantic Employee of the Year 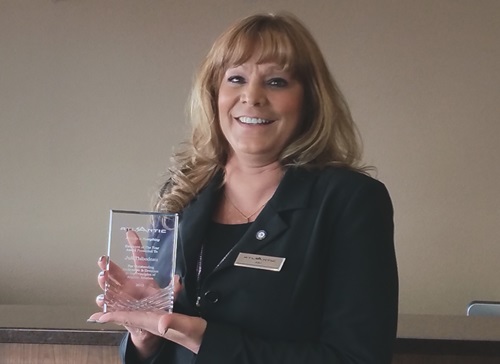 Atlantic employees do small favors and great acts of kindness every day outside of their job descriptions. Often, we don’t hear about them. Occasionally, though, we have the honor of reading about how much one of these gestures meant to a customer.

On a Saturday last year, Juli was filling in for a co-worker who was sick and her shift was almost over. An air ambulance requested transportation for a set of lungs being harvested to be brought to the airport. Knowing the window of opportunity for organs to be transplanted in very short, she tried to find a company that would standby at the hospital until they were ready. When she was not able to find someone, she decided to do it herself.

For Juli, doing this favor was also personal. Several years before, her nephew passed away and his family donated his organs. She knew firsthand the impact an organ donation has on a family, and she didn’t want it to fall through because no one would wait at the hospital.

After three hours of waiting, Juli returned to the airport to hand off the lungs.

“It was the most amazing feeling in the world,” Juli said. “I knew what I did would help a family.” It also helped her grieve from losing her nephew.

Casper’s U.S. Customs and Border Protection officer Dale Leatham saw Juli’s “immeasurable kindness” that day. “She stepped right up to help and get [the lungs] where they needed to go.”

According to Officer Leatham, you would not expect less of her. In his 40 years at the airport, he’s “never seen anyone that has such an exceptional attitude,” he said. “That’s just the kind of person she is.”

That’s part of Juli’s charm because she loves working in customer service. She has been with Atlantic for 10 years and worked in hospitality prior to joining us. While she acknowledges that there are always difficult customers or requests, they don’t diminish her desire to serve. “I greet everyone with a smile,” she said.

“She amazes me with what she can accomplish,” said Officer Leatham. “You always know what you’re getting with Juli. She’s a special person to everyone at the airport.”